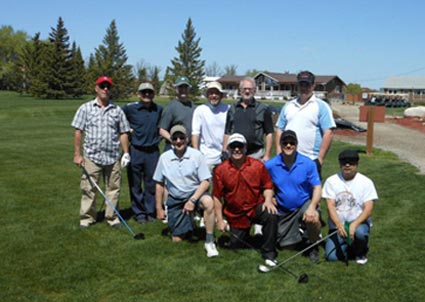 Our Men’s Golf league meets every Wednesday evening from the end of April until the middle of September (roughly 20 weeks).

If you are looking to enjoy your time on the golf course with a group guys who enjoy their golf and like to have fun on and off the golf course, this is the league for you. Each week the players draw for numbers in terms of who is playing with who. If you did want to join a group or play with a friend each week that is also not a problem.

Each week the men’s league offers weekly prizes and participants pay a nominal fee each week for things like prizes, 50/50 and $3 a week goes towards the end of season prizes and the windup meal.

The Men’s Golf League windup is normally held on the 3rd Saturday of September. Where the group plays 18 holes and then the round is followed by a steak dinner and a prize presentation.

For the Men’s League we do have a hole in one prize available to participants. Also for Men’s league participants who play in more than half of the Men’s league nights. You are entered into a draw to win a 2022 membership at the golf course.

Our Thursday Night Men’s Golf League is 9 week golf league which runs from the beginning of May until the beginning of July. The league ends with a league windup, followed by a steak dinner and prize presentation.

Our Thursday Men’s League league is a two man team event where each week you play a different team. Scores are collated each week and then teams given flights near the end of the season based on their scores, with prizes given to each flight winners at the golf league windup.

Non Members – $205 – which covers the 9 rounds of golf, end of season meal and prizes

Thursday Night Men’s Golf League is limited to 64 golfers and for several years now this league has been close to capacity.

If you are interested in joining this golf league or require more information. Please our General Manager at 204-878-2172.

Is open to all senior men 55+ (members and non-members) wishing to participate in an organized competition. The Early Bird Twosomes league is made up of two players who play together against another twosome. The same two players play together for all of the season. The teams meet at pre-arranged times from early May and have until the end of August to play all of their matches. Participants are responsible for scheduling their own matches. The early bird twosomes matches play anytime Monday to Friday before 3pm.

The Top-gun Twosome League is the same format as the early bird twosomes but is focused on the lower handicap player and has no age limit. In this league you play a match against another team. The format is that both golfers tee off and then you select your best drive. You both play from the selected best drive position and then selected the best 2nd shot and then so on until the ball is in the hole. You gain a point if you win the hole against the other team, ½ a point if you tie the hole and after 9 holes each team will have a points score for the match, which is your match score,. There is also 1 point available for the best gross team score. In the top gun league an under par round is normally required to win the match

The teams play on a Monday night from 6pm from early May and against other teams in a round robin format. The league matches are published before the start of the league. If you are unable to play your match on a Monday evening participants are responsible for rescheduling the match. Once the league has been completed for the last month of the season, the league is split into playoffs based on league ranking, with the league windup held on the last weekend of September. On that day a winner from each division will be crowned.

For more information about Golf Leagues at Lorette Golf Course, please contact our General Manager at 204-878-2172 or email lgc@lorettegolf.ca.